Turn on Gospel Radio and you’re sure to hear Melvin Williams, one of Gospel music’s most distinctive voices in the music industry. Over 50 years with the world renowned Williams Brothers, 18 Top Ten records, 7-Grammy Award nominations and 17-Stellar Awards collectively as a solo artist and with The Williams Brothers, Williams delivers Gospel music unlike anything you’ve ever heard before.

As US Music Ambassador for the US Department of State and Jazz at Lincoln Center (JALC), Williams continues to build his music legacy with his latest journey to Preserve Traditional Gospel Music taking his mission globally! The Melvin Williams Group performed at Dizzy’s Club Coca-Cola (JALC), National Geographic in Washington, DC and toured Russia, Azerbaijan, Turkmenistan and Georgia teaching and singing traditional gospel music in Concert Halls, Performing Arts Theatres, festivals, churches, schools, and American Corner Centers to children and adults across the country. Other countries Williams’ performed include London, Sweden, Bahamas and Canada. Check out the blog at www.melvinwilliams.net.

The historical project series, “The Williams Brothers: Live at the Hard Rock” recorded in Biloxi, MS, is the first time a Gospel Artist would grace the stage of one of 149 Hard Rocks in over 53 countries around the world as headliners. A full production accompanied by their band, horn and stringed orchestra, lit up the auditorium. No opening acts, no flow-breaking intermissions, and no retakes. Just ninety minutes of non-stop gospel celebration with classics like “I’ll Take You There”, “My Sweet Lord”, “Amazing Grace”, and many more. The venue was completely sold out – standing room only – and the energy level was so elevated that for the duration of the concert the audience rarely made use of their seats.

Always bridging the gap between traditional and contemporary Gospel music, Melvin Williams infuses a blend of gospel, soul, jazz, pop, mainstream and classical songs. His high-level energy and emotion-filled performance is guaranteed to bring audiences to their feet. Williams is known to jump off the stage, go into the audience, stand on chairs, and summon the audience to join him for a gospel party – regardless of race, creed or color. “Neighbor, may I have this dance?” - and the gospel party begins!

With his brothers, the legendary Williams Brothers, they earned a gold record for the WOW Gospel project that included their performance of “I’m Too Close” with Stevie Wonder as seen on VH1 Honors, and performed in some of the nation's most prestigious concert halls, including: Madison Square Garden, The Apollo Theatre, Radio City Music Hall, Carnegie Hall, The Grand Old Opry, The Dorothy Chandler Pavilion, The House of Blues and The Grammy Museum.

Williams’ duet with gospel great Lee Williams on “Cooling Water” – recorded for the “Duets” album – burned up Billboard and gospel charts for over 100 weeks and remains one of the most popular requested songs by audiences nationwide.
​

Most of you already know Jackie Gouché from the music she writes. Jackie wrote “My Help” in 10 minutes.  The song was made popular by Bam Crawford’s Purpose, and also recorded by Donnie McClurkin, The Brooklyn Tabernacle Choir, CeCe & Ronald Winans and is sung in many churches across the world every Sunday.  Quite a few know Jackie’s voice from vocals in the movie The Color Purple, where she sang the voice of Shug Avery’s younger sister in the song God Is Trying To Tell You Something. She also sang songs in movie soundtracks such as; What’s Love Got To Do With It, White Men Can’t Jump and Two Can Play That Game.

Her new CD is entitled, “BIG GOD, little me.” The project includes a duet with Jackie and her son, Davion Farris, declaring that there is “Nobody like My God”. A fresh, rhythmic and vocally stimulating performance! Other songs, including Hands In The Air, and Yeshua, will have you raising your hands and lifting your voice, or dancing along to the compelling beat! The first single released will be, “Awesome You Are,” coupled with “My Help”.

You can find Jackie every Sunday at Pastor Beverly “BAM” Crawford‘s Bible Enrichment Fellowship International Church in Inglewood, California, where Jackie is the Minister of Music and Worship Leader.  Jackie will be on the keyboard along with an 8-piece band and a 25-voice choir. In fact, her hit song, My Help was first recorded on Bam Crawford’s Purpose on Sony Records.

Jackie’s musical roots run deep, her mother Betty Gouche’, a powerful singer and musician who was raised at the piano in her father’s church, passed her gift to Jackie and her brother Andrew Gouche’, who is one of the top bassists in the US. He has played with Prince, Chaka Kahn, Snoop Lion, Warren G, Mary Mary and collaborated on hundreds of gospel CDs.  Jackie passed it on to her sons; Davion, Daniel and Darryl Farris are multitalented artists, writers, and producers. As a team they’ve worked with musicians and artists such as Kenneth “Babyface” Edmonds, Bryan Michael Cox, Usher, Mary J. Blige, Missy Elliot, Jaheim, Eric Hudson, The Pussycat Dolls, Jill Scott, Anita Baker, Lloyd, Chase N. Cashe, 1500, the Stereotypes, Soulshock and Karlin, Timbaland, Danjahand, Justice league and Ginuwine.

Jackie is an author of two books; autobiography “How Would I Know?” and has newly Released “True Worshippers”, an in-depth look at the biblical perspective of true praise and worship. Both are available on Amazon.com.

Victor Bell & Halel was birthed in 1995, reminiscent of the early Kirk Franklin & The Family after Victor received instruction from the Lord to form a singing aggregation that would cause men and women to bless Him. Victor's unique gifts of writing, teaching and directing makes him stand out with respect among his peers. His gift has allowed him to move beyond the church walls and into many fields such as TV and film. He served as a music consultant for Stan Lathan (TV director, Sanford & Son, Fresh Prince) for such TV shows as The Steve Harvey Show (whenever Steve appeared to be playing the piano it was Victor behind the scenes playing), Cedric The Entertainer, Bernie Mac show, Method & Red, All of Us,

Key & Peele, and most recently The Soul Man featuring Cedric the Entertainer & Niecy Nash. He also served as Director of Radio Promotions for Gospo Centric Records, which was home to Kirk Franklin, Kurt Carr, Stephanie Mills and many others. He was also music guest and director for the wedding of actor Blair Underwood. He's a tenured professor in the music department of UC Santa Barbara. 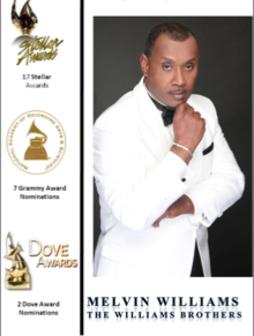 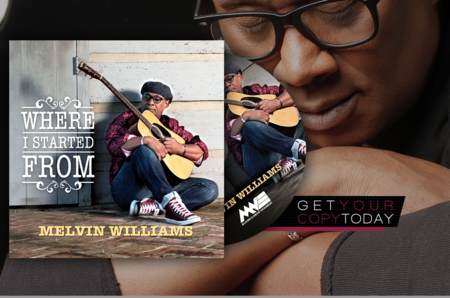 Levy is an ex-banger, ex-thug COUNTRY, CAJUN, AND CREOLE ARE JUST A FEW NAMES THAT ARE QUITE OFTEN MENTIONED WHEN YOU SPEAK OF THE DEEP SOUTHERN COASTLINES OF LOUISIANA. YET IN ANOTHER CLASS OF PROMINENCE AND STYLE ARE THE PHENOMENAL ARTISTS WHO HAVE EMERGED AND LET THEIR TALENTS GRAZE THE ATMOSPHERE.

AS WE GO WAY DOWN TO THE SUGARCANE FIELDS IN A SMALL TOWN CALLED ABBEVILLE, WHERE MUSICAL GENIUSES ARE VERY SELDOM FOUND WE WILL FIND AN EX-STREET BANGER, EX-THUG, EX-DRUG DEALER AND ONCE LOST YET NOW FOUND MOTIVATIONAL SPEAKER, INSPIRATIONAL RAP ARTIST, AND STREET MINISTER WHO IS AMAZING, ARTISTIC, ANOINTED, POWERFUL, MARKETABLE AND A SENSATION TO BEHOLD WHO GOES BY THE NAME LEVY.

YES, LEVY, WHICH IS ACTUALLY HIS REAL NAME.  SEEN ON "THE BOBBY JONES GOSPEL" AND FEATURED IN "THE TIMES MAGAZINE", HAS HELD STAGES WITH LECRAE, THE TRUTH, MALI MUSIC, KIRK FRANKLIN, BEVERLY ‘BAM’ CRAWFORD,  BISHOP NOEL JONES AND TYE TRIBBETT ONLY TO NAME A FEW. BEFORE BEING SAVED, LEVY WAS YOUR GRIMY STREET THUG, DRUG DEALER, ADDICT AND PRISON INMATE. FROM A LIFE OF CRIME TO NOW BEING A MAJOR ASSET TO A DYING GENERATION OF YOUTH AROUND THE WORLD.  LEVY HAS SEEN THE GOOD, BAD, AND UGLY SIDES OF LIFE AND KNOWS HOW TO CROSS THE STREET “WITHOUT GETTING HIT,” HE SAYS.

HE IS  THE PASTOR OF HIS MINISTRY, THE HOOD HOSPITAL MINISTRIES, HE SPEAKS AT POSITIVE FUNCTIONS IN SCHOOLS AND AIDS KIDS ON THE AWARENESS OF DRUGS AND CRIME. HE HAS TRAVELED TO MANY DIFFERENT PLACES AND PERFORMS WITH MANY DIFFERENT ARTISTS, BOTH LOCAL AND NATIONAL BEFORE BECOMING THE MAN HE WAS DESTINED TO BECOME.

HE RELEASED ALBUMS IN THE PAST AND WAS DOING WHAT HE THOUGHT MADE SENSE AT THE TIME, HE SAYS “I WAS LOOKING FOR WHAT I ALREADY HAD AND I WANTED TO BE ACCEPTED, SO I TRIED TO FIT IN.”  NOW BEING SAVED AND SET APART BY GOD, HE’S MATURE, MORE POLISHED, AND READY TO GIVE TO THE NATIONS A SOUND OF HARDCORE GRIMY TRACKS WITH VOCALS THAT CANNOT BE DENIED.

LEVY ADDS, “I’M DESTINED FOR SUCCESS, BUT NOT IN THE LIKES OF MONEY OR FAME, I’M TALKING ABOUT REACHING THE LOST, GIVING TO THE NEEDY, AND LOVING THE OUTCAST. I’M HOOD, BUT WITH GLOBAL AGENDA.

FROM DRUGS, ALCOHOL, AND PRISON TO WITNESSING, MINISTERING, LOVING AND GIVING THE GOSPEL TO THE POOR, MAKE WAY WORLD FOR WHAT GOD HAS RAISED UP TO BRING TO THE NATIONS.  WE GIVE YOU NONE OTHER THAN LEVY!

Gospel’s newest contemporary artist, Michael Stuckey, has a classic sound with some “old school swag”. His music is set to take radio by storm! Tracks such as, “Good Times, “Promises of God” and “Father/Agnus Dei” are just a few numbers set to blaze the world.

Hailing from Cincinnati, OH, Stuckey (as he is affectionately known) is a former lead singer for Stellar Award winner, Ricky Dillard & New G, being featured on "The Sweetest Name" with Grammy Award winner, Karen Clark-Sheard. Stuckey also formerly served as manager for the three-time GMA winning group, Isaac Simpson & DP and is currently founder/CEO of the Canadian Glass Awards.

Moving into a new season of life, ministry, and music, Stuckey was lead by God to venture into the music industry as a solo artist. Stuckey’s sound is one given by God and birthed through his worship and personal time. His vocal range and power is captivating yet unique.

Stuckey conveys to listeners, “In this season, you will learn how God brings you to a set place. That “baby” you’ve been carrying will soon be birthed. This is your birthing moment. Every song was written from that place, reminding us Who and Who’s we are!”d lifting your voice, or dancing along to the compelling beat! The first single released will be, “Goodtimes”. 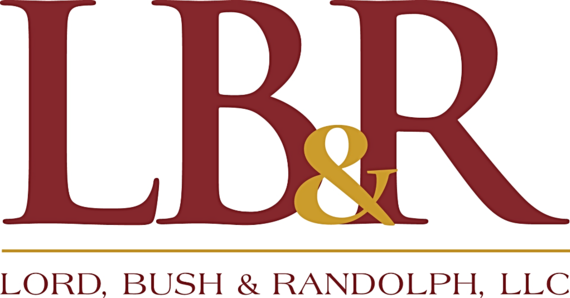